In mature industries like aerospace and defense, mergers and acquisitions are primary tools of corporate strategy. As the bases of competition for product and service offerings become ever more firmly established, the race for competitive advantage increasingly relies on initiatives to reshape the scale, scope, and vertical depth of a company’s structure. More specifically, corporate development initiatives are how mature-industry firms adapt to change—inflections in demand, perturbations on the landscape of technology, capital markets, politics, etc.

These principles come vividly to my mind as I consider the a new map of Aerospace, Defense, & Government Services–Mergers & Acquisitions (January 1993 – December 2016), which we have published today. 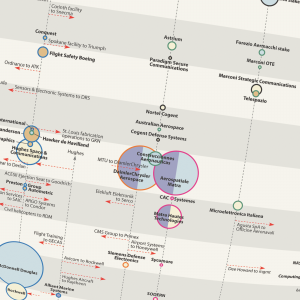 The document expands and updates a well-regarded infographic from the 2000s, which we have revived in a partnership with Renaissance Strategic Advisors. The Map depicts the mergers, acquisitions, divestitures, and major recapitalizations that comprise the 25-year lineage of two dozen leading companies in our industry. Each transaction’s rendering on the Map indicates its date and value as well as the sectors in which the acquired businesses participate and the nationality of their home markets. The resulting array of images puts a distinctive face on the deal making that has remade aerospace companies and restructured the industry.

Six years past the 2010 inflections marked by the Great Recession’s bottom and Iraq War’s end, what are the story lines of corporate development that stand out on this Map?

That last observation may bear an ironic tone, but it’s not a criticism. After all, the robust valuations which nearly the entire industry enjoys today are some kind of testament to the merit in the general corporate development initiatives that have prevailed since 2010. At the same time, for all that it may illuminate about how our industry has employed M&A to adapt to change, the Map reveals little about where these story lines may lead beyond the next inflection.