The pandemic has accustomed us to living in virtual worlds and hearing speculation about the ways in which our actual lives may never resume as before. Microsoft founder Bill Gates recently said that he believes “over 50 percent of business travel and over 30 percent of days in the office will go away.” Explaining why the pandemic-induced surge in virtual house calls is likely to endure, Harvard’s Dr. Thomas Delbanco concedes: “There are times when doctors, nurses, or therapists really need to see you — no question about it. But there are also times when they really don’t.” It was against the backdrop of such head-turning new year’s predictions that I spent the holidays reading about the Cold War and forming a nostalgic rebuttal to those prophesies of Zoom.

At the start of my professional life I led a surveillance platoon of the U.S. 1st Armored Division, which was deployed to defend the “Frontier of Freedom” in the towns surrounding Nuremburg, West Germany. So it was that after cracking open Fulda Gap: Battlefield of the Cold War Alliances, I quickly thumbed forward to Chapter 7, “A Personal Perspective from Platoon Leader to Army Group,” by General Crosbie Saint, who had commanded 1st AD during my service in it. Saint’s reflections transported me back to 1984 and the pastoral beauty of the Bavarian Oberpfalz, where we were actively preparing to fight a third world war. 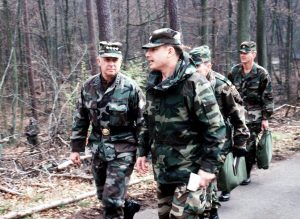 Prominent among the preparations Saint recounts was the terrain walk, a compulsory practice of every officer leading a maneuver unit regularly to traverse the ground where his troops would deploy, battle book in hand, mastering the contours of the landscape and plotting out his squads’ movements in the General Defense Plan. Saint writes ardently about how “repetitive terrain walks at multiple command levels to analyze and become expert in exploiting the terrain for tactical purposes” gave the U.S. a decisive advantage over the vast armies of the Warsaw Pact.

The still-clear memory of then-Lieutenant Grundman’s own terrain walks along the monikered kill zones in my battle book—The Kemnath Bowl, Erbendorf Fire Trap, et al.—prompted me to wonder if even the marvels of a virtual reality simulator would leave as indelible a mark. I doubt it. While the adoption of videoconferencing for commodity conversation is no doubt here to stay, the premium work of enterprise leadership must remain incarnate. Just as the experience of looking out from a ridgeline engages all the senses, strategic vision flows from an intuitive integration of time and space which no tele-mediation can fully activate.

Beyond the battlefield lay other terrain walks affirming my conviction. In April 1993, just three weeks on the job as chief executive of an IBM teetering on insolvency, Lou Gerstner launched Operation Bear Hug, which directed each of the company’s 250 most senior executives to visit at least five key customers over the next three months to learn why IBM had lost their trust. Years later, Gerstner wrote that Bear Hug made manifest what came to be the motive force of IBM’s acclaimed transformation: “[W]e were going to build a company from the outside in and . . . the customer was going to drive everything we did in the company.” Gerstner invested this practice of deep listening to customers with the same strategic importance Saint attributed to a lieutenant’s intimacy with the sightlines of his firing positions. Operation Bear Hug was a terrain walk.

One of the trade secrets of my career as a business consultant to the aerospace industry is never to pass up an invitation to take a plant tour. No matter how near to your next flight’s departure you may be asked, “Wanna see the shop?,” the right answer is always, “Of course.” When, a decade ago, I toured SpaceX’s Hawthorne headquarters and observed Elon Musk sitting at his desk among the busy cubicles of thirty-something engineers gutting out their work in T-shirts, I instantly understood how the company’s garage-shop culture could revolutionize the staid business of space launch. Years earlier, the clinical attention to workers’ safety I saw at the bustling CFM-56 jet engine plant in Villaroche told me more about the success of the GE-Safran joint venture than even its impressive financials. So too did I need actually to feel the cavernous quietude in an antique defense factory to appreciate why even smart managers are sometimes blind to sunk costs. The aerospace plant tour is often a terrain walk.

To all you leaders who like me find the progressively virtual world unsettling (and with apologies to a certain light lager’s ad campaign), I say, “Find your terrain walk!” Once we again are free to move about, go physically to the crucible of what creates value for your enterprise and open your senses. Only from that vantage, and not through a screen, can you see truly into its future.