It is hard not to read a pretext for protectionism into the Executive Order President Trump signed last month under the ponderous title, “Assessing and Strengthening the Manufacturing and Defense Industrial Base and Supply Chain Resiliency of the United States”. And yet, the Administration also has gone out of its way to wrap the initiative in the mantle of ambitions far more weighty and strategic, and that’s the thing that caught my eye about the announcement. What if we really could have a serious deliberation about defense-industrial strategy?

The order directs the Secretary of Defense to lead a 9-month “comprehensive evaluation of the defense industrial base and supply chains, with input from multiple executive departments and agencies”. The Assessment aims to identify vulnerabilities, assess their significance, determine their causes, and recommend what the Administration should do to “avoid [adverse] contingencies . . . ameliorate any aspect . . . assessed as deficient . . . [and] strengthen the United States manufacturing capacity and defense industrial base.”

What could be wrong with that? Well, to begin with, the Order’s chief proponent, Peter Navarro, director of the National Trade Council, insists on explaining the Order’s impetus with a tired campaign slogan about the putative loss of “more than 60,000 factories and almost 5 million manufacturing jobs.” What’s more, the Order itself underscores hot-buttons of economic nationalism—conditions which “impair domestic capacity”, alarming reliance upon “nations that are or are likely to become unfriendly or unstable”, etc. It is these kinds of expressions that are feeding reasonable expectations that this latest proclamation is only another log on the fire of the White House’s incendiary trade agenda.

Regardless, Navarro and other proponents of the Order have talking points comparing its ambition to that of Project Solarium, the Eisenhower Administration’s 1953 review of national strategy toward the Soviet Union. Solarium is celebrated less for its impact on US foreign policy—and hardly at all for its consideration of defense-industrial concerns, by the way—than for its method, which involved a five-week 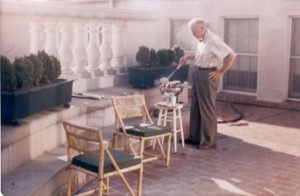 planning exercise among only a couple dozen officials culminating in a day-long seminar with the President. Participants were assigned to one of three, eight-person teams, each of which the President charged with formulating a best possible argument for one position toward how US policy toward the Soviets should evolve—“Team A” was assigned to defend the status quo-containment policy; “Team B”, a position advocating sharper confrontation against Soviet designs; and “Team C”, a posture which aimed actually to roll back the boundaries of the Soviet sphere. Although the exercise resulted in only a modest adjustment to practical policy, Project Solarium has become a touchstone of strategic planning, what Tyler Nottberg at Gettysburg’s Eisenhower Institute called “a testament to the idea that constructive competition and creative cooperation can help diverging perspectives become productive and not destructive.”

Improbable as that aspiration may sound for a White House convulsed in overt combat among its principals, let’s suspend disbelief and imagine a defense-industrial base assessment that genuinely lived into the model of Project Solarium. What questions would such a project address, and around which positions would teams be assigned? I envision such an assessment being organized around what I regard as the three canonical strategic problems that concern defense-industrial policy: integration, interdependence, and capitalization.

The first problem concerns civil-military integration: Should military programs consciously draw on commercial resources, or be deliberately nurtured in isolation? Team A would advance the prevailing position of the post-Cold War era, which has favored a progressively closer integration of defense and commercial resources—the view underlying, for instance, Secretary Ashton Carter’s outreach to Silicon Valley. Team B would adopt a still more radical position along that trajectory, one calling for the elimination of all barriers impeding the participation of commercial firms or introduction of commercial technologies to address defense needs. And, from the other end of the spectrum, Team C would make the best argument for a “hot-house” defense-industrial sector, largely segmented off from the rest of the economy, a position which has generally arisen out of an abundance of concern for security.

The second problem, addressing interdependence, goes to the ostensible heart of the new Executive Order: Should the United States, as a matter of policy, cultivate certain segments of the defense-industrial base that rely on no foreign sources of supply? Again, Team A would embrace the prevailing policy of the past twenty years, which has promoted a progressively globalized industry emerging from what had been a fragmented collection of largely national markets. Team B would double-down on interdependence, along the lines of provisions in the 2017 defense authorization act which extend the boundary of the “national technology and industrial base” beyond North America to encompass the United Kingdom and Australia. Team C, of course, would have to find a way to embrace and revive from its 19th-century heyday a defense-industrial policy of autarky.

The third problem which our imaginary industrial policy assessment would address concerns capitalization: For what parts of the defense-industrial base is public ownership, or other forms of public underwriting of risk, the most efficient capitalization? Team A would argue the US status quo, a position which, while nominally rejecting state ownership, is complicated by the public investments made through companies to develop technology and weapon systems and by its maintenance of a substantial government-owned industrial base of depot maintenance and munitions facilities. Team B would impose the full discipline of private capital markets on the defense-industrial sector, ending acquisition practices that involve making implicit capital investments to facilitate development programs and privatizing the depots and ammo plants. Finally, Team C would build the argument for a so-called arsenal system, a position which, at the least, promotes full nationalization of certain sectors of the industrial base or their organization into tightly regulated monopolies.

Whereas the small-bore issues on which the White House is focused—retirement of skilled tradesmen and single-point-of-failure nodes in the upstream supply chain—no doubt merit remedy, its Executive Order is unlikely to instigate a Solarium-quality strategic planning exercise for defense industry, my daydream notwithstanding. The Order’s scope and objectives are too cramped and its organization too unwieldy. Moreover, this Administration exhibits no patience or appreciation for the exploration of positions that hold no preconceived appeal.